THE MAJOR COMPONENTS OF the human lens responsible for the refractive index gradient resulting in a flexible, transparent lens are α, β, and γ crystallin proteins. These proteins are synthesized only once in the neonatal period and never replaced because cellular turnover in the human lens is absent.1-4 The literature attributes oxidative insults, caused by specified wavelengths of ultraviolet (UV) light exposure, as among the major causes of post-translational modifications of crystallins, leading to protein aggregation and ultimately lens opacification.5,6 Why is it then that the most common type of cataract—nuclear sclerosis, which occurs in the area of the lens that receives the most visible and UV light—still occurs even without exposure and in the presence of endogenous antioxidant intake, such as of lutein, zeaxanthin, vitamin C, and other nutrients absorbed by the lens?7,8,9 This fact suggests other mechanisms that might also be responsible for cataract formation and presbyopia.

While the cause of age-related lens protein aggregation disease is believed to be multifactorial, there is debate regarding the factors other than oxidation that contribute to crystallin aggregation and subsequent opacification. Human lens protein aggregation is understood to be a process whereby a combination of truncation, deamidation, covalent, and other post-translational modifications of protein structure occur.10 It has been proposed that these “stressors” acting over time “unfold” proteins, increasing susceptibility to damage by oxidation.

Once lens proteins misfold, there is chemical and structural loss of integrity of the crystallin arrangements. Interestingly, pressure has been shown to lead to precipitation and aggregation of proteins, for example.11-18 Under high pressure, proteins are penetrated by water, and syneretic changes occur.19 However, since the advent of modern cataract surgery, research implicating other mechanisms has slowed. Despite a dearth of new mechanistic proposals, research continues to support the hypothesis that internal lens pressure may be worthy of continued study. There are a number of known physiological mechanisms described here that together may reveal new targets for treatment of both presbyopia and cataract. 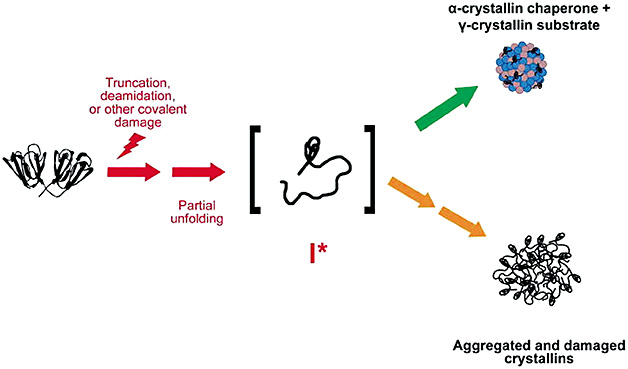 The mammalian lens has a separate and distinct internal pressure gradient from intraocular pressure (IOP) created by aqueous formation. In the young mouse lens, internal lens pressure is around 340 mm Hg, and in elderly mice, this pressure almost doubles.20 This increase occurs linearly over time, yet very little research has suggested it as having a significant impact on the structure and function of lens proteins responsible for maintaining lens function. Pressure appears to have been largely overlooked as a factor in age-related lens protein aggregation diseases.9-15,21

Water within the lens is either “free” (water not attached to crystallin proteins) or attached to water (H20) (water attached to crystallin proteins). During accommodation, water is released from its attached state with lens crystallin. This release decreases osmotic pressure and increases lens osmolarity.22,34 As accommodation declines, this pressure increases, causing the free-to-bound water ratio to decrease. Ultimately at the zenith of presbyopia, the lens is fixed in an unaccommodated, flat, and compressed state. This fixed state reduces the tendency for water movement out of the lens body, leading to a higher pressure within the body of the lens. Eventually, the lenses’ ability to respond to forces that increase the pressure becomes irreversible, resulting in cataracts.33

Compression via Constraint of the Lens Capsule

During accommodation, zonules apply stress to the lens surface. The transition from an unaccommodated to an accommodated state reduces this mechanical force.23,24 As lens fibers are continually produced throughout life, the environment under capsular constraint, fixed in volume, results in steady and linear pressure increases due to ongoing crowding and compaction. This increase results in linearly increasing hydrostatic pressure and, ultimately, syneresis (water accumulation in lakes). The increase in lens stiffness increases, and as the elastic modulus of the lens proteins increase, more force must be transmitted through the capsule to mold its shape. This is believed to be the primary cause of presbyopia.23,24

Gap junction cells (GJCs) are responsible for maintaining the metabolic activities of the cells within the lens. The GJCs are “coupled”; ie, they connect and communicate with each other to maintain homeostasis across cell barriers (coupling conductance). As the lens undergoes age-related changes, the number of these connections is reduced, presumably due to oxidative damage to lens gap junction proteins (connexins).26,27 This process leads to depolarization of the intracellular voltage and increasing intracellular concentrations of Na+ and Ca+.

As coupling conductance decreases, forces that drive lens circulation must increase to maintain lens circulation and health. Reduced conductivity and increased lens radius, the results of continual addition of crystallin proteins with age, both cause intracellular hydrostatic pressure to increase.20 Thus, reduction in gap junction coupling is a direct cause of age-related increase in intracellular hydrostatic pressure in the nucleus of the lens.27

Gap junction coupling of the fiber cells within the lens to cells at the surface is an essential component of Ca2+ homeostasis. A loss of gap junction communication cuts off the “mature fiber” (middle) zone from this circulation. With time, uncoupled cells fail; ions become “stuck” in the cell; and intracellular Ca2+ increases, creating a toxic environment for lens proteins25, causing them to denature, aggregate, and scatter light as seen in nuclear cataract.28,29

The number of gap junction channels (GJCs) decreases with age. This results in increasing hydrostatic pressure, decreasing sodium influx leading to trouble moderating the increase in lens hydrostatic pressure.20,32 At the point where the lens has lost accommodation, it is “stuck” in its compressed state, and less water can leave the internal lens spacing, resulting in lower higher internal pressure.33 The increase in fluid volume leads to large increases in intralenticular pressure, leading to the death of lens cells responsible for maintaining lens homeostasis. In summary, the continual production of lens cell fibers in the environment constrained by the lens capsule contributes to continual crowding and compaction.34 As pressure builds, metabolic activity is reduced, and lens architecture is distorted, causing increased stiffness and light scattering, ultimately leading to sclerosis, presbyopia, and opacification of cataracts.23

It is proposed that a root cause of age-related lens protein aggregation diseases is this constant increasing internal lens pressure, which interrupts the metabolism of healthy lens proteins, disrupts fluid circulation, and eliminates the ability for Ca2+ to leave the lens, increasing opportunities the hold oxidation takes, triggering the protein damage that gradually contributes to age-related lens protein aggregation diseases. If these mechanisms are proven to be implicated in human lens cataract formation, new targets for therapy and cures may be developed. ■

A peer-reviewed version of this article can be found at https://www.dovepress.com/proposed-role-for-internal-lens-pressure-as-an-initiator-of-age-relate-peer-reviewed-fulltext-article-OPTH

Dr. Glazier is the founder and visionary behind FluoreSCENE Media and ODs on Facebook. He is founder of Shady Grove Eye and Vision Care, a large medical model practice in Rockville, MD, and a business development executive for KeplrVision. He is a 1988 graduate of the University of Maryland and a 1993 graduate of the New England College of Optometry.

Dr. Hitchmoth has owned and operated a private practice for 27 years that she expanded in 2018. She had a 22-year tenure serving our nation’s veterans at the Department of Veterans Affairs; she served as a chief of optometry, a director of residency, and a health systems analyst; and she is a recognized telehealth expert.