AS MUCH AS I LOVE TO SHARE THE LATEST IN SURGICAL techniques and present outcomes in new medication and technology, in this issue I am thrilled to share information about a recent international medical relief program in which I participated, with Surgical Eye Expeditions (SEE) International.

In early August 2022, I flew 23 hours to join a team of surgeons delivering cataract surgery to a highly needy population in northern Namibia. During 5 long days of surgery, we performed manual small-incision cataract surgery (MSICS) on roughly 500 patients.

I was part of a “cataract camp” set up by Dr. Helena Ndume, a well-known Namibian ophthalmologist, in conjunction with SEE International. Founded in 1974, SEE International, a nonprofit humanitarian organization, aims to provide eyecare services to anyone in need of them, regardless of background or ability to pay. Dr. Ndume, head of the ophthalmology department at Windhoek Central Hospital, Namibia’s largest hospital, has restored sight to more than 30,000 citizens of her country. She was listed among the British Broadcasting Corporation (BBC)'s 100 most influential women during 2018.

I had joined the team along with my practice partner Barry J. Wolstan, MD; and Michael Colvard, MD, of Colvard-Kandavel Eye Center in Encino, CA. Each August, for more than 20 years, they have joined Dr. Ndume in Namibia for her cataract camps. This was my first time working in one of these cataract camps. Notably, this camp was among the first few cataract camps restarted after a pause caused by the COVID pandemic.

Namibia became an independent nation in 1990. As a young country, it has a small number of ophthalmologists. To provide the population with eye care, Dr. Ndume will operate 4 or 5 cataract camps per year in areas of need. 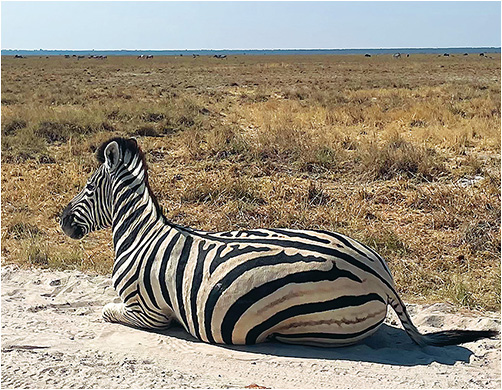 Our international flight landed in Windhoek, Namibia’s capital city. After another flight to the city of Ondangwa, we traveled by bus to Oshakati, where the hospital was located.

We were operating in a primary care and small general surgery hospital in which 4 wings had been converted into a cataract clinic. The beds had been removed from the hospital rooms, and 9 to 12 cots now occupied the rooms instead. Two operating rooms (ORs) were used, 4 surgical beds in one OR and 2 surgical beds in the other OR.

For patients, the process was a 2- or 3-day event. First, a patient would be evaluated as being a qualified candidate for surgery. Then, a surgeon would perform MSICS on one eye, with the patient staying overnight. Barring complications, the patient would be released in 1 or 2 days.

These cataracts had a significant level of pathology, some of them 4+ brunescent or white cataracts. For these patients, MSICS was the only treatment option. Sometimes the cataracts were so tumescent they were scarred to the iris.

Patients would sit on a bench prior to their surgery. About half an hour prior to the procedure, the patient would be dilated and have a retrobulbar block for anesthesia.

Days were long, starting at 7:45 a.m. and ending at 8 p.m., but the hours flew by with this team. We three U.S. surgeons were joined by four Namibian surgeons. Each of the U.S. surgeons would perform between 8 and 10 surgeries per day, a figure dwarfed by the 30 to 40 surgeries the Namibian doctors, who were more accomplished in MSICS, would perform. If a patient’s eye was not well dilated, for instance, we would have a Namibian surgeon handle that case. Thank goodness there was ample trypan blue. Using MSICS, along with donated surgical supplies, each case cost roughly $30.

Assisting all of us were 30 to 40 nurses, orderlies, and technicians. They choreographed the orderly movement of 500 patients between the hospital rooms and the ORs.

Besides the level of pathology and a language barrier, we were faced with a unique cultural challenge. Among the Himba people, children receive beads or necklaces and then accumulate more beads and necklaces during their lives. Removing the jewelry, according to this tribe’s beliefs, will kill their soul. We simply had to work around the jewelry during surgery.

As much as I enjoy the stimulation of my day-to-day medical and surgical practice back home, there was something that definitely filled my soul going out there and participating with Dr. Ndume and her team. I would love to return and participate in another “cataract camp” in Namibia or elsewhere.

In the United States, our patients often express their appreciation to us. In Namibia, I felt that appreciation in deep ways, as staff would sometimes sing, and the joy and thankfulness of the patients was palpable. ■

Dr. Goldberg would like to thank SEE International and Alcon for providing the necessary surgical supplies for this program.

Dr. Goldberg is a partner at Wolstan & Goldberg Eye Associates, Torrance, CA, and a member of the Presbyopia Physician editorial board.

Disclosure
Dr. Goldberg is a consultant for Alcon.